The Munich ACM SIGGRAPH Chapter is pleased to welcome Ramesh Raskar for a talk on June, 23rd. Please register for the event here . 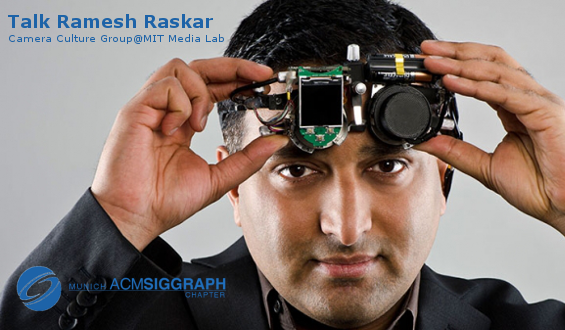 The Camera Culture Group at the MIT Media Lab aims to create a new class of imaging platforms. This talk will discuss three tracks of research: femto photography, retinal imaging, and 3D displays.

Femto Photography consists of femtosecond laser illumination, picosecond-accurate detectors and mathematical reconstruction techniques allowing researchers to visualize propagation of light. Direct recording of reflected or scattered light at such a frame rate with sufficient brightness is nearly impossible. Using an indirect ’stroboscopic‘ method that records millions of repeated measurements by careful scanning in time and viewpoints we can rearrange the data to create a ‚movie‘ of a nanosecond long event. Femto photography and a new generation of nano-photography (using ToF cameras) allow powerful inference with computer vision in presence of scattering.

EyeNetra is a mobile phone attachment that allows users to test their own eyesight. The device reveals corrective measures thus bringing vision to billions of people who would not have had access otherwise. Another project, eyeMITRA, is a mobile retinal imaging solution that brings retinal exams to the realm of routine care, by lowering the cost of the imaging device to a 10th of its current cost and integrating the device with image analysis software and predictive analytics. This provides early detection of Diabetic Retinopathy that can change the arc of growth of the world’s largest cause of blindness.

Finally the talk will describe novel lightfield cameras and lightfield displays that require a compressive optical architecture to deal with high bandwidth requirements of 4D signals.

In 2004, Raskar received the TR100 Award from Technology Review, which recognizes top young innovators under the age of 35, and in 2003, the Global Indus Technovator Award, instituted at MIT to recognize the top 20 Indian technology innovators worldwide. In 2009, he was awarded a Sloan Research Fellowship. In 2010, he received the Darpa Young Faculty award. Other awards include Marr Prize honorable mention 2009, LAUNCH Health Innovation Award, presented by NASA, USAID, US State Dept and NIKE, 2010, Vodafone Wireless Innovation Project Award (first place), 2011. He holds over 50 US patents and has received four Mitsubishi Electric Invention Awards. He is currently co-authoring a book on Computational Photography. Links: [Personal webpage] –  http://www.media.mit.edu/~raskar

Wow! Thank you for your interest  – hope you enjoyed the evening as well as we did. This is only a short impression – more to follow…