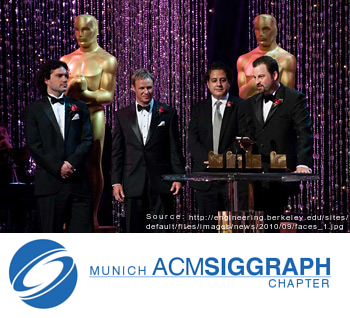 On Sunday, 21th of September the Munich ACM SIGGRAPH Chapter will be presented in the Audimax of the University of Television and Film (Hochschule für Fernsehen und Film, HFF) in the time from 2:30PM to 6PM at the Bernd-Eichinger-Platz 1 to the professional audience.

Special guest of this first public presentation of the Munich ACM Siggraph Chapter in the Bavarian capitol town is Paul Debevec. Debevec is a veteran of the computer graphic industry especially in the area of HDR rendering and lighting. He worked amongst others on special effects of Hollywood-Blockbusters like Spiderman, Superman returns and King Kong. He also was responsible for optimal lighting in Avatar. In Munich he will speak about his considerably large experiences, reports about Advances in Creating Photoreal Digital Actors, gives an unique view behind the curtain and shows inspiring excerpts from various movies.

The event is free of charge, but requires a registration to the event on the website of the Munich ACM SIGGRAPH Chapter.

The former President of SIGGRAPH and the Association for Computing Machinery (ACM) Alain Chesnais and Mashhuda Glencross will open the event. Alain Chesnais speaks about new developments in 3D content for the Web.

Also included is Geek’s home, a museum founded by Thomas Harbers with a hands-on approach. The model was the Exploratorium, a museum in San Francisco, that is focused on the teaching of natural sciences. The event concludes with current movies from CAF – the Computer Animation Festival.

The Munich ACM SIGGRAPH Chapter aims to support science, research, art, culture and education. Especially by arranging scientific events in the field of computer graphics, interactive technologies and their application areas, we offer broad access to new knowledge in these fields and enabling their dissemination.